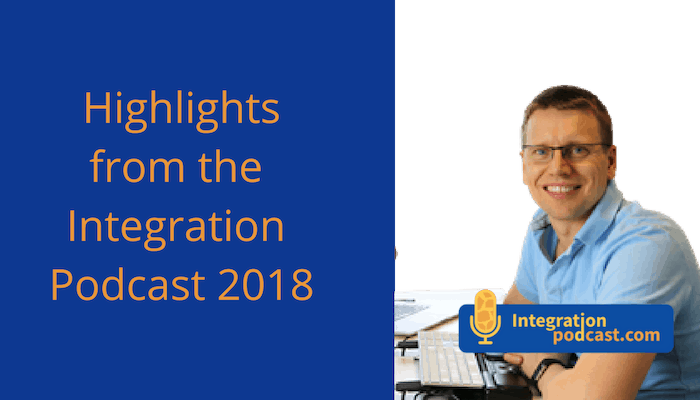 Highlights from the Integration Podcast 2018

So, since I made the first episode of the Integration Podcast on February 4., 2018 I have published 29 episodes. There was one podcast that was skipped and delivered later. It has been a really interesting experience trying to understand how to do a podcast, interview people and learn about integration. I think the cool thing about creating the podcast has been the ability to ask really smart people about what they are working with and how they see the future of integration.

In this blog post, I will take a look back on the three episodes I like the most.

Episode 6: How to automate SAP PI/PO testing with Mark Oshifeso from Anadarko Petroleum

The first episode, I would like to mention is called How to automate SAP PI/PO testing with Mark Oshifeso from Anadarko Petroleum and was published February 28., 2018.

In this episode, I had Mark Oshifeso on the show. Mark was one of the first people to use Figaf´s
Integration Regression Tool for SAP PI/PO.

Mark wanted to make it a lot easier to do an upgrade of the SAP PI/PO system, and with the help of
Figaf IRT he was able to do so.

The second episode which I would like to highlight is called SAP Integration and API and was published Oktober 29., 2018. I did the episode at SAP Teched Barcelona and it was fun to sit down with Harsh.

In this episode, I talked with Harsh Jegadeesan, who is a product manager from SAP. He is responsible for quite a few of the integration as SAP and has a strong presence in SAP progress
to API.

We talked among other things about the following topics:

The last episode I would like to take a look at again is called SAP Integration with Adam Kiwon.

In this episode, I had a conversation with Adam Kiwon who is the part of WhitePaper InterfaceDesign. Adam and his team have created different CPI Adapters, content and products
for making SAP PI/PO better. The thing I liked about it was we got a really great conversion going about what was happening in SAP Integration.

In the podcast we talked among other things about the following topics:

Highlights from the Figaf Blog 2018

So, I really hope you enjoyed the three podcasts, I had chosen to highlight. If so, you might also like to read this blog post: Highlights from the Figaf Blog 2018.