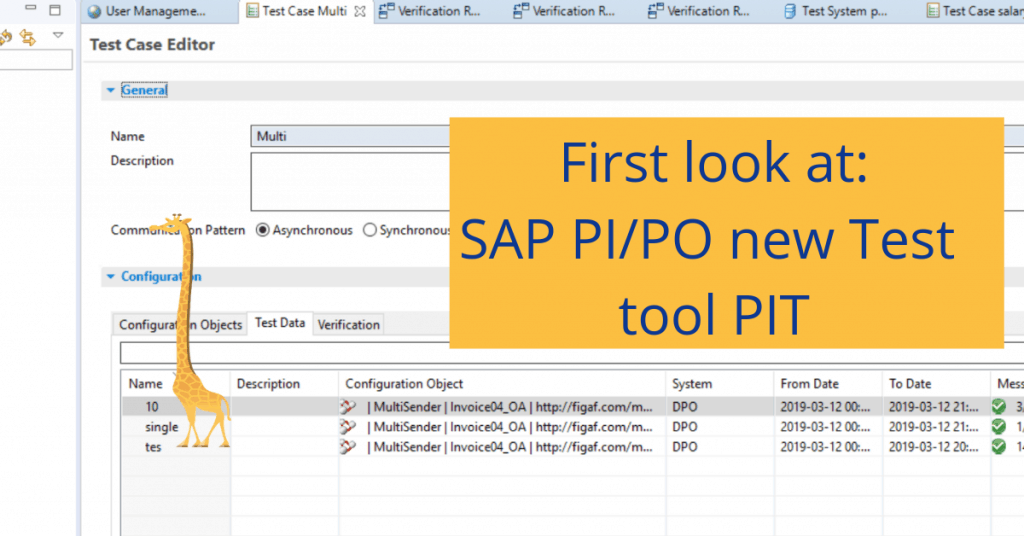 The testing solution from SAP to test PI/PO called PIT

Friday the 8 of March was the day that SAP finally released SP 14 of SAP PI/PO 7.5. The big promise was the new testing solution that allowed users to test SAP PI message process. It is called PIT.

“TL;DR the testing solution from SAP has some good features for testing. If you are serious with your testing and want full coverage then try out the Figaf IRT tool. “

As a vendor with a similar product, I have been interested in knowing what was going on with it and how it was working. I had seen some initial working of it but did not know where it would end. If it was going to be a killer product then it would remove part of my market. No customers can see the solution and judge if it will be useful for their use cases.

The key takes away is that testing is an important part of your it process where it is upgrading/patching, development or change of your interfaces. It is something that customer have expected and would like to see improved.

It is also good to know that SAP is taking the same approach as we have for fetching and running test cases.

Let’s start with the good part.

The Good part of PIT

I have not seen any roadmaps of the tool and how much resources and new features will be delivered but it looks like there will be more effort in it. So this is all based on the initial release.

Check out the video that I recorded that show my first look at what the tool can do.

I believe that PIT will probably run more tests that my tool because the availability of the tool and customers it is simple to install the system.

What are the requirements

The test system must be installed on a 7.5 sp 14 or above. It can only run a test on the system with that SP level.

PIT  is able to collect test data from AEX system 7.31+ that have been updated within the last 2 years (It requires this note 2650265, which seems to have been backported to all service packs on 7.31+).

PIT can also collect messages from ABAP based systems here you need to apply some more support packages to allow the system to read data.

I still see some areas where we have advantages over the SAP tool. (Okay, I may be a little biased, but if you try it out you will hopefully too.)

Why you still need to buy my tool

Will we integrate the Figaf IRT tool with PIT

Since SAP will have a lot of test cases running in the tool we may be able to add some additional benefits of running tests with it. There may be something that can be implemented. We can leverage the way SAP is processing messages if you don’t want to get the test messages into the adapter. We could also use the ability to send a message directly to the message processing without creating an XI30 message.

We cloud probably also leverage the SAP part about downloading messages from dual-stack systems, and use them in our landscape.

IT will probably depend on when customers are adopting 7.5 sp14.

If you have a plan to apply 7.5 sp 14 in the near future to your landscape do evaluate it. And see how it fits your plan and idea for working with the tools.

If you want to tool that can help you set up test cases faster, give you full tracking of what is being developed then try out the Figaf IRT tool? And we do support CPI also in the same approach.

You can check out the tool and see if it will suit your testing capabilities better. Check it out at Figaf.com/IRT